There are many different types of soil throughout Australia, ranging from dry and sandy Tenosol which is largely infertile to rich dark Dermosol which retain adequate water and have good agricultural potential.  Soil may be too acidic, too alkaline, too saturated with minerals, too dry, too damp and too deficient of minerals to be any good for agriculture.  But each of these soils may be improved by breaking them up with organic matter.  With organic matter, found in varying quantities in all soils, comes a host of micro-organisms.  For this reason, it is an offence to take soil from one state to another in Australia.

So-called Organic Soil is simply soil which has been enhanced with organic matter in order to build up an ecosystem which is not reliant on chemicals for plant growth, weed control or as a pesticide.  As organic soil is being built over time, a positive relationship develops between micro-organisms in the soil, vegetation and insects.  An eco-system is established, allowing earthworms and other insects to thrive, which in turn provides nutrition to the plant life so that they grow hardy and resistant to diseases.  The long term benefit for vegetation grown in organic soil is considerable.

Organic soil building never ends and is infinitely sustainable.  It is a continuous cycle of adding compost to the soil, turning it and allowing it to be fallow.  Organic matter may easily be added to the soil where a composting system has been established in the garden.  Household kitchen and yard waste can easily be converted to nutritious fertiliser for the soil.  Composting with worms gives the added benefit of worm excrement to the mix.

If you are concerned about the worldwide conservation of our natural resources and the addition of chemicals to plants which you will eat, then you are probably already buying food products labelled organically grown.  Why not extend your concern to your own backyard?  Your garden, be it fruit bearing or not, will benefit from the establishment of an ecosystem devoid of chemicals.

When trees and bushes are pruned, mulch the off-cuts and use them to cover areas of the garden which are prone to weeds or become quickly dried out.  Set up a compost heap and a worm farm.  Read up on the plants in your garden, and find out how best to care for them naturally.  Having and maintaining an organic garden requires some education, initially, but it is well worth the effort.

Birds in the Garden 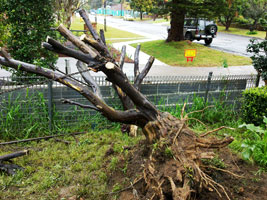